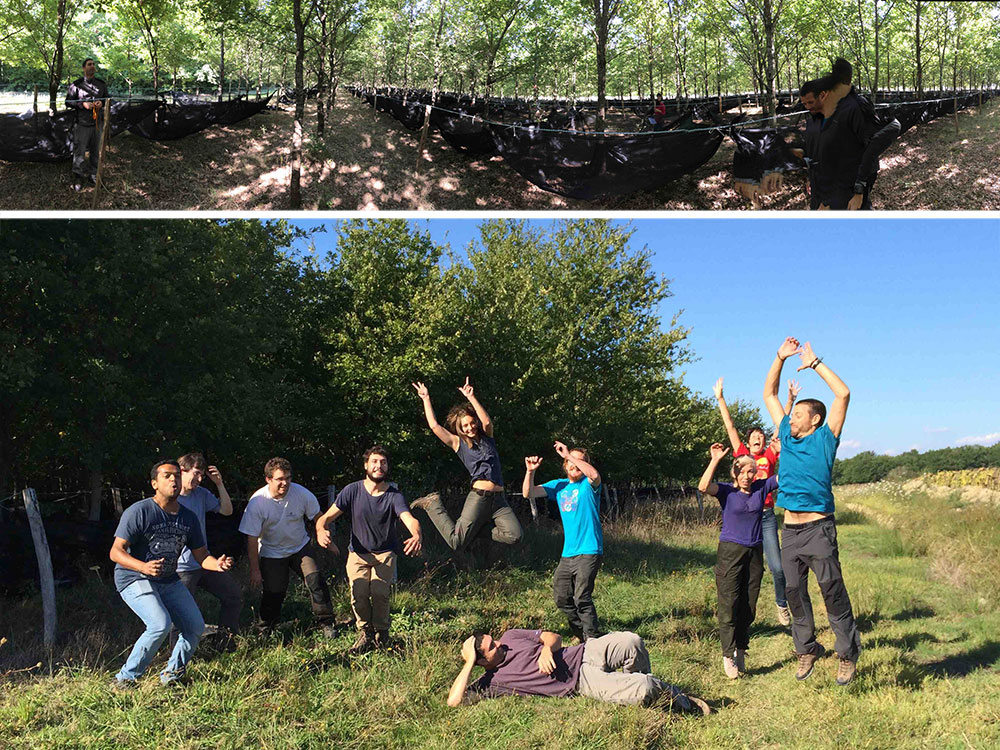 There are widespread concerns that trees, due to their long life-span, are not able to cope with the rapid ongoing climate change. While many studies have so far investigated potential impacts of climate change on forests, much less attention has been given to the potential evolutionary responses of tree populations. However there is a large body of evidence stemming from experimental evolutionary genetics showing that adaptive differentiation has extensively occurred during past environmental changes. This project challenges these views and explores the pace at which evolutionary change has taken place during past gradual and under current rapid environmental change. It builds on the reconstruction of evolutionary trajectories during the Holocene and Anthropocene to infer evolutionary rates, taking temperate oaks as a case study. The project assembles insights and contributions from paleobotany, ecology, ecophysiology, genetics, genomics and evolution in a generic framework for the assessment and prediction of rates of evolution at different hierarchical levels (genome to phenome). Beyond the assessments of past and current evolutionary change, the project provides an integrative simulation framework that will allow the monitoring and prediction of adaptive responses of trees under various evolutionary scenarios. This work is in collaboration with the geneticists Antoine Kremer and Christophe Plomion (INRA).

Due to their life cycle characterized by long lifetime and large gene flow, forest trees are particularly exposed to temporal and spatial variation in selection. Plasticity may thus play a key role in forest trees response to climate change. The interplay between phenotypic plasticity, microevolution and gene flow on adaptation will be illustrated through the study of phenological traits in three forest tree species, beech, sessile oak and silver fir. Phenological traits have indeed been shown to be a major determinant of tree species distribution and ecosystem functioning. They also show strong responses to current climate change and large genetic variation both within and among populations, suggesting that they might evolve fast if climate change generates new selection pressures. We will focus on bud burst, taking advantage of well-adjusted process-based phenological models predicting its date of occurrence as a function of temperature and photoperiod.

The originality of our project lies in (i) integrating different adaptation mechanisms in ecological forecasts of climate change, which has only rarely been attempted; (ii) studying the interaction between these different mechanisms of adaptation, (iii) combining different types of modeling approaches and observations to both explore and predict the adaptive challenges and responses of tree populations experiencing climate changes. More precisely, we will make an original use of extant process-based models simulating variation in bud burst date and its impact on demographic rates, to quantitatively predict the direction and force of selection acting on phenological traits across environments in current and future climate.

The risk assessment of biodiversity decline along with climate change urgently requires a better understanding of how organisms respond to increased environmental stochasticity, accounting for evolutionary and demographic processes in populations and communities. We focused on oak trees and their acorn feeder specialists as a case study (1) to characterize the adaptive capacities of oak populations by quantifying variations in their key-fitness traits along environmental gradients and (2) to assess the impact of environmental stochasticity at individual, population and community levels by analyzing the evolutionary and demographic responses of feeder specialists to pulsed resource (oak acorns). This project relies on an extended network for biodiversity survey, reproductive phenology monitoring, functional traits measurements and on the joined expertise of four partners. This work is in collaboration with the geneticists Samuel Venner (CNRS).

2. Adaption and Evolution to Water Stress

Cavitating the conifers of the world project

Water-stress induced cavitation in the hydraulic pathway of woody plants is a good indicator of drought resistance. To improve our knowledge of this process, vulnerability to cavitation and xylem anatomy (tracheid and pit membrane structures) will be measured on a wide range of coniferous species. We will characterize cavitation resistance of tree species within a wide range of conifer taxa using the Cavitron technique in Bordeaux, but will rely on living plant material, equipment, and techniques available at Kew to study xylem anatomy. This will allow us to determine whether cavitation is directly linked to mechanical properties of anatomical features.

Resistance to cavitation is a critically important trait for evaluating the ability of plants to survive and recover from drought periods and, therefore, predicting future drought-induced forest decline. However, recent publications have provided evidence that some of the most extended techniques used to evaluate the hydraulic function and vulnerability to cavitation of plant organs may be prone to artifacts. The discovery of these artifacts have raised important questions over the reliability of some previously published plant hydraulics data, in particular data relating to the capacity of plants to refill cavitated xylem conduits while the xylem is under tension. Since most of these artifacts seem to be related with the sample processing, collection, etc., the objective of this project is, by working with intact plants and using non-invasive techniques, to determine (i) if the daily patterns of embolism formation and repair are routine in woody plant species, and (ii) if previous studies that concluded that some species are highly vulnerable to cavitation had actually been evaluated with biased techniques. In this sense, the use of X-ray microtromography (micro-CT) can serve as a reference method for the study of xylem embolism and refilling and help swiftly resolve controversies since it allows the direct visualization of xylem conduits in intact plants at high resolution and determine the degree of embolism and embolism spreading patterns. Results will have important implications considering the actual necessity of validating xylem embolism data by direct observation in intact plants for an improved understanding of water transport physiology in plants.